WE ARE SUFFERING – EWURU ORTHOPAEDIC HOME PATIENTS CRY OUT

The National President, Mr. Chuks Iku and members of Boji-Boji Forum, on Friday, December 31, 2021, visited the Usifoh Community Orthopaedic Nursing Home, Ewuru Agbor in Ika South Local Government Area of Delta State, to donate food items to the patients and make some observations regarding the challenges facing the Orthopaedic Home.

Speaking during the visit, Mr. Chuks Iku, on behalf of his team, thanked the management of the Nursing Home for taking care of the inmates, but frowned at the way and manner the Government and well-to-do indigenes of Ewuru Community have abandoned the Orthopaedic Home, saying that he was so disappointed over lack of medical equipment in the Nursing Home. 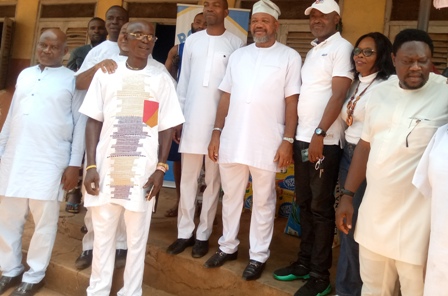 Speaking further, Mr. Chuks Iku who is a Lagos based businessman and Consultant, called on the State Government and the indigenes of Ewuru Community to come to the aid of the community Orthopaedic Home by helping to provide the needed hospital equipment fix the borehole and renovate the entire building, particularly the leaking roof. He, therefore, promised that by the special grace of GOD, by April 2022, Boji-Boji Forum will also assist the home inmates with some Walking Aids, Wheel Chairs, etc. 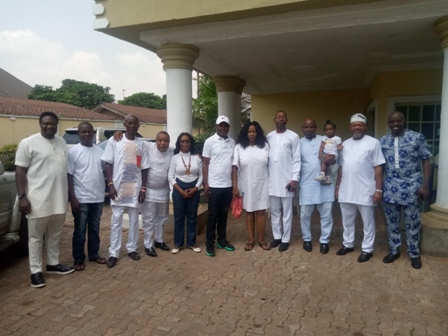 Continuing, the National President having inspected the Nursing Home alongside members of his team, promised the mother of Prominent Sammy, a one year and six months old baby boy from Edo State that Boji-Boji Forum will help transfer her son to a better hospital where his disfigured legs from birth would be properly treated. He stated that Boji-Boji Forum is made up of sons and daughters whose families have lived in Ika land for at least twenty-five years, but not necessarily Ika indigenes. He advised other Ika sons and daughters to come and register with them so that together, they can move Ika Nation to greater heights.

Also speaking, Mr. Eze Onyebuchi, an accident victim, said that he was involved in an accident in December 2020 and that since then, he has been on the hospital bed. He said he is an Igbo by the tribe.

In addition, he disclosed that since last year that he was admitted to the Nursing Home, no associations or group of people have ever done what members of the Boji-Boji Forum did for them. He said people have been visiting, but none of them has come with food items, money and others. He passionately appealed to the Government to come to their aid as they all are seriously suffering.

Speaking on behalf of the community, the senior worker, Mr. Matthew Alima, thanked members of the Boji-Boji Forum for coming to put smiles on their faces. He stated that there are thirteen groups nominated from the four quarters of Ewuru Community by the Elders in Council for the treatments of the patients, which he said, come up every Eke and Affor day. He said they also have a medical doctor who normally comes to treat the patients on weekly basis.

Continuing, Mr. Alima said the Orthopaedic does not have portable water, as the only borehole that was sunk by the Government some years ago is faulty and they find it very difficult to get water to use. He further disclosed that the entire roof of the building is leaking water, that they have no chairs, tables and even constant electricity supply.

In addition, he also prayed to God to replenish the pockets where members of Boji Boji Forum brought out the money to buy bags of Rice, cartons of Indommie, Tins of Milk, Ground Nut Oil and other food items.