WHY GOVERNOR OKOWA SHOULD BE RE-ELECTED — Chief Gbonu 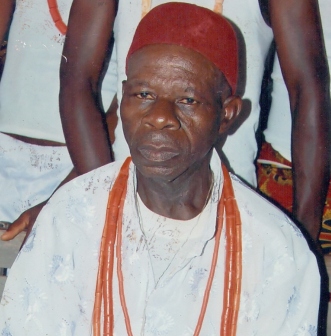 The Chairman, Vigilante Group, Owa-Alizomor Unit and the Aiwerioba of Owa Kingdom, Chief Johnson Gbonu has categorically pointed out the reasons why all Deltans should rally round His Excellency, Senator Dr. Ifeanyi Okowa, the Executive Governor of Delta State, on his ambition to re-contest for a second tenure come 2019. The retired staff of Ika North East Local Government Council granted this interview at his residence in Owa-Alizomor on Wednesday, April 4, 2018.

Highlighting the major reasons why Governor Ifeanyi Okowa should go for a second tenure come 2019, the chief disclosed that since the history of politics and political leadership in Delta State, no elected Governor was able to perform, compared to what he (Governor Okowa) has done in two years even in their two tenures, noting that in terms of road construction, building and renovation of schools, hospitals and empowerment of electorates, Governor Okowa has scored 99 percent over 100. He stressed that despite the fact that Governor Okowa is from Ika nation, the kind of developmental strides they are seeing in Ika Land in particular and Delta State in general, have not been on recordsince the history of Delta State politics.

Chief Gbonu emphasized that it is during the tenure of Governor Ifeanyi Okowa whom he described as God’s sent to all Deltans, a traditional ruler from Ika Land, His Royal Majesty, Dr. Emmanuel O.Efeizomor II (J.P) OON, became the Chairman, Delta State Traditional Rulers Council, many unemployed Deltans, particularly the graduates became gainfully employed through his Smart Agenda on Agricultural Programmes, Agbor Technical College became a modernized and equipped institution, even the construction of Old Lagos Asaba Road, which he said was awarded for construction by Dr. Emmanuel Uduaghan, Governor Okowa’s predecessor about fifteen years ago, was completed.

Speaking on Community growth and development, Chief Gbonu thanked the Obi of Owa, His Royal Majesty, Dr. Emmanuel Efeizomor II, for his good leadership roles, stressing that ever since the monarch ascended the throne of his ancestors, peace, unity and development have come to stay in Owa Kindom. He therefore charged all indigenes of Owa-Alizomor Community home and in diaspora to support Governor Okowa in 2019 with whatever they have to support him with, saying because it is during his administration as Governor of Delta State, two Owa-Alizomor born legal luminaries became elevated.

These legal practitioners according to him include: Hon. Barr. Victor Eghen Ebonka, who was re-elected the Chairman, Ika NorthEast Local Government Council and Hon. Justice Joe Egwu, who was recently appointed the Chief Judge of High Court, Delta State.

He passionately appealed to the Governor to remember the Chiefs in Owa-Kingdom and bad roads, Primary Health Centre and other abandoned projects in Owa-Alizomor Community, as the entire members of the community are solidly behind his candidacy come 2019 and beyond.

In another development, Chief Gbonu commended the Executive Chairman, Ika North East Local Government Council, Hon. Barr. Victor Ebonka for the good works he has been doing in the local government, ever since he assumed office as Council Chairman. He further disclosed that ever since Barr. Ebonka popularly known as Alan. K became the Chairman of Ika North East Local Government Council, electricity power that was disconnected from Owa-Oyibu Community since seventy years ago, was connected, and the Council Staff can now enjoy light in their various offices and departments, some staff of the local government council who before now have been receiving salaries without coming to work, can now report to their official duties as early as 8:15 am from Monday to Friday. I am using this medium to call on the Council Chairman to continue the way he is working, he will go back for a second tenure if it will be possible for Council Chairman to go for second tenure.