YOU HAVE FAILED US, Host Communities Tell Pan-Ocean

Members of Ekuku-Agbor, Obiayima, Owa-Alidinma, Ndemili, and other Communities under the OML 147 Cluster 1 Oil production have expressed disappointment over the activities of the leadership and staff of Pan-Ocean Oil Company in the area, saying that the company has failed them by her inability to fulfill her promises to them.

It could be recalled that the above-mentioned host communities, on the 7th of April 2021 held a peaceful protest, blocking the entrance of the Pan-Ocean company, displaying their placards where all their demands from the company were written down. It could also be recalled that during the protest, the General Manager, OML 417 Cluster 1 Oil production, Engr. Collins Atikube while responding to the protesters’ demands, promised to tar the road to the company which has remained in a deplorable condition for many years, within weeks of the protest, and promised that by the special grace of God, he will use his good office to fulfill the Memorandum of Understanding (MOU) as agreed with the host Communities during a crucial meeting held with members of the communities on the 1st of October, 2019.

Based on this, an effort was made by Ika Weekly Newspaper Reporter to revisit the Oil Company to find out if the promises have been fulfilled or not. On reaching there, our Reporter discovered that the road the company through Engr. Atikube promised to tar within a period of two weeks had become worse than it was during the last peaceful protest.

To find out more about the fulfillment of the MOU, our reporter had a chat with the President, Community Relations Committee (CRC), Mr. Iwezu J.I. said the community has reported Pan-Ocean to the Ministry of Justice, under the Department of People’s Right, Asaba.

The Pan-Ocean has, however, in response to the community’s request, been asked to fulfill their promises on or before the end of June or face the consequences of their action. 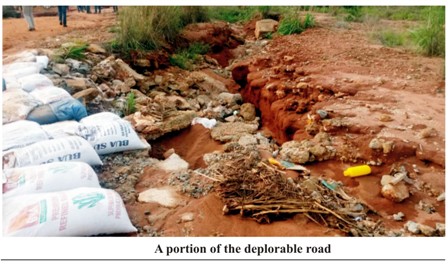 He stated that Pan-Ocean has been making promises to them, which according to him have remained unfulfilled to date.

According to him, “When Engr. Atikube was making all the promises to us particularly to tar the road to the company, I was very excited, hoping that he would do as he had promised without knowing that he was joking with us.

“Could you imagine, a whole oil company like Pan-Ocean has no access road to the company,” he asked.

Meanwhile, as at the time of filing this report, every effort to reach Engr. Atikube proved abortive.

0Shares
0 0
Share
Previous NWAOBOSHI SHOULD APOLOGIZE TO OKOWA OR RISK EXPOSURE OF HIS ATROCITIES -Barr. Ojobu
Next COMMITTEE FOR RESOLUTION OF LAND DISPUTE BETWEEN EMUHU, UMUNEDE CONSTITUTED